Bush Directive for a "Catastrophic Emergency" in America: Building a Justification for Waging War on Iran? 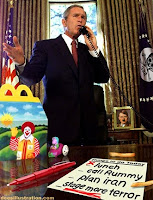 "Another [9/11 type terrorist] attack could create both a justification and an opportunity that is lacking today to retaliate against some known targets" (Statement by Pentagon official, leaked to the Washington Post, 23 April 2006)

The US media consensus is that "the United States faces its greatest threat of a terrorist assault since the September 11 attacks" (USA Today, 12 February 2006) The American Homeland is threatened by " Islamic terrorists", allegedly supported by Tehran and Damascus.

America is under attack" by an illusive "outside enemy".

Concepts are turned upside down. War becomes Peace. "Offense" becomes a legitimate means of "self-defense". In the words of President Bush:

"Against this kind of enemy, there is only one effective response: We must go on the offense, stay on the offense, and take the fight to them." (President George W. Bush, CENTCOM Coalition Conference, May 1, 2007)

The intent is to seek a pretext to wage a preemptive war.

A "terrorist attack on America" could be used to justify, in the eyes of an increasingly credulous public opinion, on "humanitarian grounds", the launching of a major theater war directed against Iran and Syria.

Allegedly supported by Iran, the terrorists are said to possess nuclear capabilities. They are supposedly planning to explode "radiological dispersion devices" (RDD) or "dirty bombs" in densely populated urban areas in the US. Former Secretary of State Colin Powell had already forewarned in 2003 that, "It would be easy for terrorists to cook up radioactive ‘dirty’ bombs to explode inside the U.S. … How likely it is, I can't say..." (10 February 2003).

The sheer absurdity that Al Qaeda might have advanced capabilities to wage a nuclear attack on America is, nonetheless, pervasive in US media reports. Moreover, numerous drills and exercises, simulating a terrorist attack using nuclear devices, have been conducted in recent years, creating the illusion that "the threat is real":

"What we do know is that our enemies want to inflict massive casualties and that terrorists have the expertise to invent a wide range of attacks, including those involving the use of chemical, biological, radiological and even nuclear weapons. ... [E]xploding a small nuclear weapon in a major city could do incalculable harm to hundreds of thousands of people, as well as to businesses and the economy,...(US Congress, House Financial Services Committee, June 21, 2007).

Posted by antoine de cicereux at 9:19 AM