A Miscarriage of Justice

...Twelve years later, on 31 January 2001, a panel of three Scottish judges convicted a former Libyan intelligence officer for mass murder at Lockerbie. Abdelbaset Ali al-Megrahi was tried at a specially convened court on a former US air force base near the Dutch town of Zeist. Under a special international arrangement, the court, which sat without a jury, was temporarily declared sovereign territory of the United Kingdom, under the jurisdiction of Scottish law. 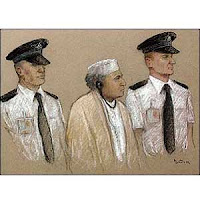 Al-Megrahi is still the only person to have been found guilty in connection with the attack. He was sentenced to 27 years in jail. His co-accused, Al Amin Khalifa Fhimah, a fellow Libyan intelligence officer, was acquitted. Al-Megrahi was initially told that he would spend at least twenty years in prison, but the Crown, which was prosecuting, protested that this sentence was unduly lenient and petitioned the judges for a longer one. In 2003 the judges reconvened to rule that he must serve no less than 27 years before the parole board would consider his eligibility for release. Al-Megrahi’s defence team had already lodged an appeal against the conviction, but in March 2002 the guilty verdict was upheld.

...Lawyers, politicians, diplomats and relatives of Lockerbie victims now believe that the former Libyan intelligence officer is innocent. Robert Black QC, an emeritus professor of Scottish law at Edinburgh University, was one of the architects of the original trial in Holland. He has closely followed developments since the disaster happened and in 2000 devised the non-jury trial system for the al-Megrahi case.

Even before the trial he was so sure the evidence against al-Megrahi would not stand up in court that he is on record as saying that a conviction would be impossible. When I asked how he feels about this remark now, Black replied: ‘I am still absolutely convinced that I am right. No reasonable tribunal, on the evidence heard at the original trial, should or could have convicted him and it is an absolute disgrace and outrage what the Scottish court did.’

Posted by antoine de cicereux at 2:29 AM


Sarkari Result is the most Trusted Latest Government jobs & Sarkari Result Portal for the job seekers. Sarkari Result Provided Updated instantly every moment regularly of all latest jobs Results, Answer keys, Admit Cards, Online form for Various Government Sarkari Exam, Exam Syllabus, Admission form updates related to job information. Through the website. you can get all the latest information of state or central level Government job in india. Sarkari Result provides PSU Jobs informations as well. Government giving enough opportunities to make a good and bright future in india.Sarkari result helps you to get all jobs in government sector.All Universities Admission, Results are Provided on time to time at Sarkari Result. Board Result of all state of india is available on this site. Sarkari Result Providing all the guidance about fill up the online form, Application fee and form submission. All process from start to end is available for the job seekers.Once the Student applied for the new job through the sarkari result. Now he just needs to be updated with the Sarkari Result to get the new information of announcement about exam date, Admit card,Call Letter, Answer key and finally the Result and Interview.

Sarkari Result is the most Trusted Latest Government occupations & Sarkari Result Portal for the activity searchers. Sarkari Result Provided Updated in a flash each minute routinely of every single most recent occupation Results, Answer keys, Admit Cards, Online structure for Various Government Sarkari Exam, Exam Syllabus, Admission structure refreshes identified with employment data. Through the site. you can get all the most recent data of state or focal dimension Government work in india. Sarkari Result gives PSU Jobs informations too. Government giving enough chances to make a decent and splendid future in india.Sarkari result causes you to land all positions in government sector.All Universities Admission, Results are Provided on time to time at Sarkari Result. Board Result of all condition of india is accessible on this site. Sarkari Result Providing all the direction about top off the online structure, Application charge and structure accommodation. All procedure from begin to end is accessible for the activity seekers.Once the Student connected for the new activity through the sarkari result. Presently he simply should be refreshed with the Sarkari Result to get the new data of declaration about test date, Admit card,Call Letter, Answer key lastly the Result and Interview.